Beeing deployed on the western front, Baker Company has seen some of the most brutal battles of World War II. Some of them were well documented, others were lost to history over time. The 29th has seen more fighting than one soldier alone could ever talk about, it is for that reason that our Field Reporters brought two of their most exciting Reports for you to enjoy this month! 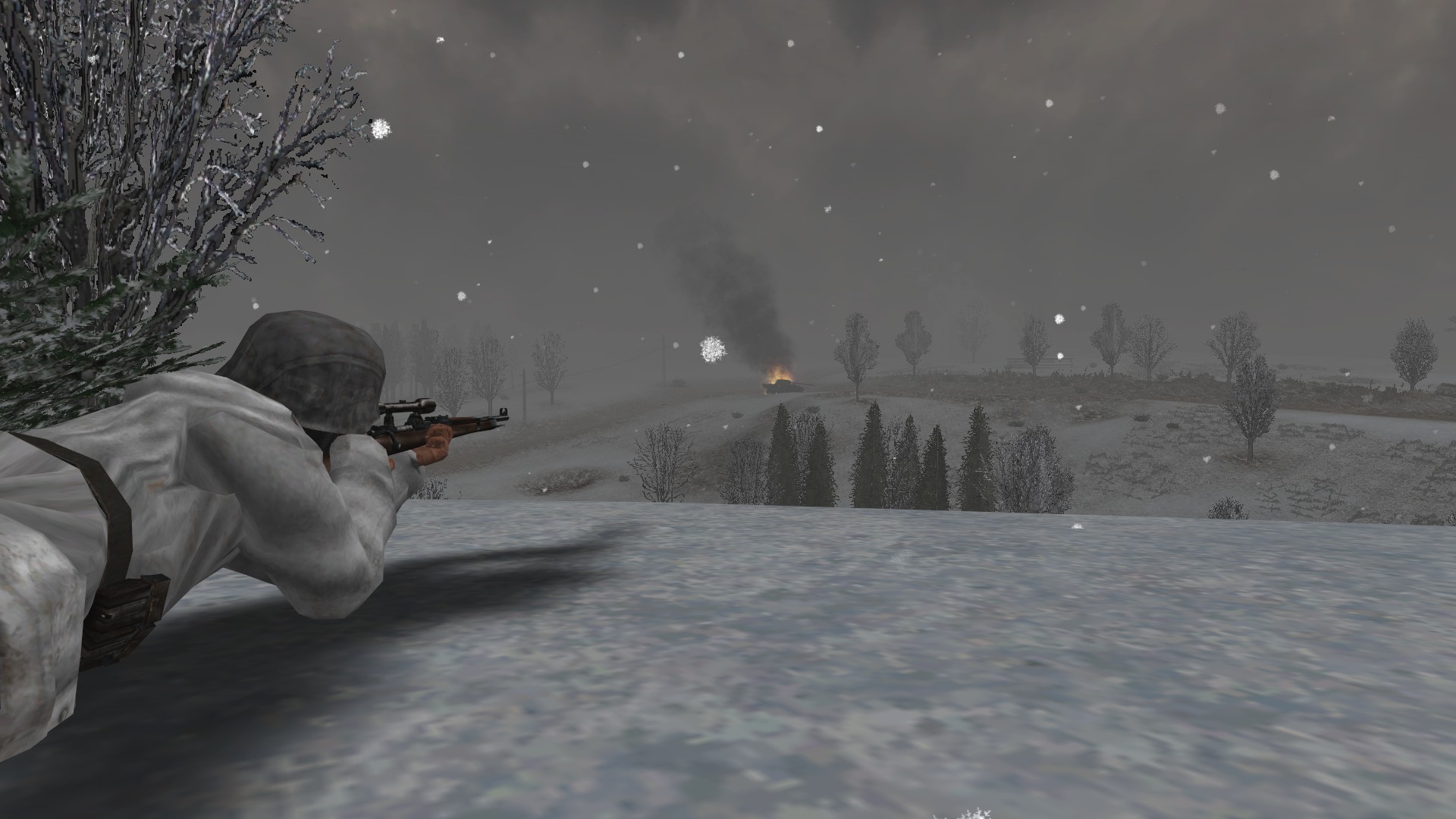 This was the last I heard from the Generalfeldmarschall before being sent back to Arnhem after being beaten back by the enemy paratroopers yesterday. We were reorganized into a Kampfgruppe. It was odd, I remember I used to be with familiar faces but now even my platoon is made up of mixed soldiers. I see soldiers of the SS, the Volkssturm and the regular army. We were supposed to fight together. Fanatics, kids and old men and soldiers. As we made our advance on Arnhem the silence grew bigger, well aside from the engine noise from our vehicles. At least I was alone with my own squad in the truck, no fanatics and forced children. The truck stopped and the Unteroffizier ordered us out. We were told to check our ammo and if necessary restock it at the depot. My Karabinier 98k looked practically unused. After I loaded the strip magazine, I looked around. Some soldiers were with empty looks in their faces, others were excited to fight for the fatherland. I just wanted to protect my family and friends from the horrors of war.

"Move out" yelled the Hauptmann, "To Arnhem, men!" Halftracks and panzers moved along the road, the rest of us were on the flanks watching for the enemy. The woods looked normal, the only difference was that we saw no animals and only few birds were singing. The rays of the sun went through the canopy of the woods and blinded me whenever I moved into them. At the same time, I feared the crack of gunfire and the possibility of it hitting me, or worse, my comrades. Buildings were seen between the woods and the Unteroffizier made the sign to halt. Beside us were the panzers and halftracks, and we had to keep up with them so there was no time to properly look at the building. Luckily for us it seemed empty. Inside it we found nothing but civilians. They were hiding in a corner of their bedroom, the father, an old man in the front of them. We disregarded them and set up to have a good line of sight inside the town.

Panzers were moving below us on the street. That's when we heard it, the thump of a PIAT and the sound of an exploding panzer below us, making the entire building tremble. We heard the fire of enemy rifles and submachine guns. The Arnhem counterattack had begun and I heard other groups yell to their men to fire back. At the same time I ducked out of cover to assess the situation. Muzzle flashes were seen from the large building which must have been the town hall, a large building with multiple stories. Soon the building was peppered with high-explosive shells as the Panzers retaliated. "Move out!" yelled the Unteroffizier.

Down the large flight of stairs was the burning hulk of metal that was once a Panzer IV Ausf. H. It was almost right outside the door, luckily the explosion had broken a part of the wall and we used it as cover to move into the neighboring building. On the second floor was a mixed group of Volkssturm and SS, the SS were firing as much as possible with their K98s, MP40's and STGs while most of the Volkssturm men were suppressed. "Fire you cowards!" Yelled my Unteroffizier to the Volkssturm. "The more and better you fire the worse they will!" I'm not sure if it was plain fear for him or they just realized this when he said so, because they suddenly started popping out and taking pot shots at enemy emplacements. One of them took a bullet to the head and died on the spot, then another one fell, but they kept trying. "Poor men" I thought, "No training, no experience, cannon fodder." the fighting endured for the majority of the day and night, but we now had a foothold inside Arnhem and that was enough to give the men some fighting spirit. The british fought with ferocious aggressiveness and determination over the next couple of days. Eventually we killed them. When it was over I realized, I hadn't fired a single bullet.

The remaining british paratroopers fled across the river Nederrijn to their polish allies. From all over the front things looked better and better. I feared that this would be one of the last successful counter offensives of the war...

Memoirs of a german Soldat on Operation Market Garden, 17th to the 25th of September, 1944

The following account is based on a true story. Any exaggeration or lies is resented by SBS News, as we try to offer the most realistic accounts of true stories possible. Anything you see or read in this column has been offered to us by our trusted sources. Discretion is advised.

Maupertus. The most prolific battle of the war. Years upon years of rumours were abound in the 50’s as historians and passionate war lovers turned their attention to the German town. Before we, at SBS news, turn our attention to it, we must first ask ourselves this: What is Maupertus?

Maupertus, a town in Northern France, was on the forefronts of the war. Finding itself in Lower Normandy, Maupertus was one of the most vulnerable places. It is for that reason why German command put their gold there. It was lying in plain view, and the Allied Forces had no idea. Until June 16th, 1944, when the 29th Infantry Division rolled through, only high command knew of the treasures that lay in the town. The guards of said town, who also didn’t know, were tasked to defend the town to their last man, such was the German way, or so they were told. The commanding officer of the German town, Captain Wiesahn, was a pure veteran and had plenty of experience besides his accolades. He alone knew of the value of this town.

Upon hearing of the American forces storming the beaches of Normandy and sweeping the area of German troops, the Captain decided to employ defensive tactics. He had men stationed across and around the town, who served as scouts. He had orders and was gladly going to follow them. It was only on June 15th that one of his scouts reported back to him, informing the good Captain of the impending forces coming to fight. They were mere hours away. The Captain had made his preparations well and was prepared for a fight. He had deployed vehicles to block off certain areas to force the American soldiers to move right into the Captains hands. His tactics thoroughly thought through, he waited.

In the early hours of the next day, the Captain awoke with a jerk. The rumbling of a tank was fast approaching. He quickly awoke his men, not wanting to be caught off guard, and waited for the soldiers to fall right into his hands. The 29th ID approached fast, so much so they had quickly passed the point of no return, the point that the Captain had been waiting for.
With a massive scream, the Captain ordered his men to open fire, an order which they gladly obeyed. The first shot was fired straight at the Sherman tank, the only tank that was in the battle, by an anti-tank weapon that was aiming from down the street.

It hit the tank square in the tracks, disabling its movement. Machine guns fired into the fields, Rifle fired from the buildings, Grenades were thrown over hedges and many soldiers died. The road, covered in blood was empty of any living bodies. Carcasses lay in the fields, and live men were waiting behind cover. They were given orders, and leapt into action straight away. They ordered their mortar to put smoke down on the field, allowing them to move up. Lights were ordered to throw their smokes into good positions to avoid being seen. The Germans, being blind to the American advance, were forced to retreat or fire blindly into the smoke. They chose the former. The Americans, having found a tactic that works, used it to advance up the town. They took the church and multiple farms around the town. They kept a slow push and gained reinforcements every few minutes, albeit only a few men. At this point, neither side were sustaining heavy casualties and this brisk pace of action was sobering. The Germans, however, had another idea. The Captain informed a few men to stay and humour the Americans by shooting, retreating, repeating at them, whilst he led a detour force to hook around and recapture the church, and the Leroux farm and surrounding trenches, cutting off their reinforcements and catching the enemy in a pincer movement. They split up and went their separate ways, ready to rely on their new tactics. The Captain’s men took the church and looked across to Leroux farm to see his detachment of men had taken it. On his go, they all started shooting. This time, heavy casualties were sustained. The Americans had been vanquished. For now. The mopping up had yet to be done. The Leroux farm detachment moved towards the American carcasses, looking for stragglers, to which they found none.

The Germans had won the battle. But as Captain Wiesahn looked around in the church tower, he heard a bang. In a split second he turned his head to see a tank shell flying towards him. The most frightening of this new action though, was that there were ten tanks speeding towards the town followed by infantry.

The church tower was blown away, the Captain with it. The German soldiers, leader-less, decided to still fight to the last man. It was not until they were outnumbered 20 to 1 that they surrendered. Only 6 German soldiers survived, only 2 survived to this day, and only 1 has shared his tale with anyone. The tale of the brave captain, who held off invaders.