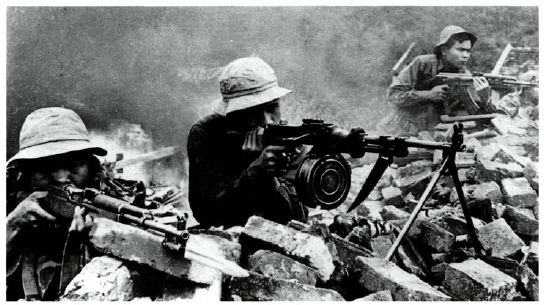 Contrary to the common, modern pop culture perception that the North Vietnamese forces were composed of simple farmers equipped with simpler weapons, the conventional army was in actuality a modernized power receiving exorbitant amounts of aid from Communist-aligned countries, while the Viet Cong guerillas were closer to the contemporary symbol. In Rising Storm 2: Vietnam, this munitions disparity is seen in the variety and varying amounts of archaism within the weapons accessible by both the PAVN and NLF factions.

One of the first weapons chambered for the 7.62x39mm M43 round, the SKS was designed with lessons learned from World War Two. For example, the Soviets main existing rifle, the Mosin-Nagant, fired a cartridge too powerful in the contexts it was used. While effective at ranges up to 1,000m, most infantry combat was held at distances of 100m to 300m. This meant the 7.62×54mm was rarely used to its full potential. The weight and recoil produced by the full-power cartridge were significant motivators for the Soviet Army to consider intermediate cartridges. 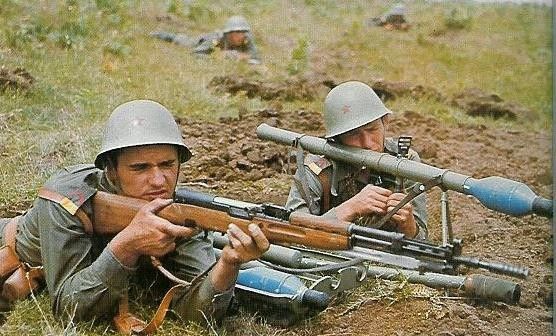 Designed in 1944, adopted in 1949, and then replaced three years later by the AK-47, the SKS can be considered a stop-gap solution. Featuring a spring-loaded bolt carrier, this self-loading rifle is easily field stripped and reassembled without specialized tools, well-suited for the soggy environments of Vietnam. To this extent, while the SKS found itself quickly obsoleted by the AK-47 in the Soviet military, the former found a second life in other Soviet-aligned countries.

Vast quantities of obsolete and redundant SKS rifles were donated to movements around the world. Serving as one of the primary arms of the NLF, SKS's in Vietnam were gradually phased out and replaced by AK variants as logistics from foreign powers continued. In game, this is abstracted through weapon availability in campaign mode: early war, the SKS is the most modern rifle available to the NLF; and in the late war, the NLF gain access to the Soviet-produced AKM. One advantage that the SKS holds over AK variants is a consequence of its longer length; the SKS fires at a velocity twenty meters per second quicker than the replacing AK variants do.

With much of the same philosophies that drove the development of the SKS, along with inspiration from the German Sturmgewehr 44, the AK-47 was created for the modern world. Often considered one of the first assault rifles, the concept for this iconic weapon was borne from the woes of wounded soldiers lamenting the failures of their issued rifles. Featuring innate usability from simplicity and reliability, the AK-47’s entry into the Soviet military was hampered by production issues, which conveniently allowed the SKS more years of life.

In 1959, these issues were remedied with the introduction of the modernized AKM, equipped with a stamped sheet metal receiver that was lighter and easier to produce. A slanted muzzle break included with the design also aided in recoil control. From this design came all three AK variants featured in RS2:V - the AKM itself alongside the Chinese Type 56 and Type 56-1. 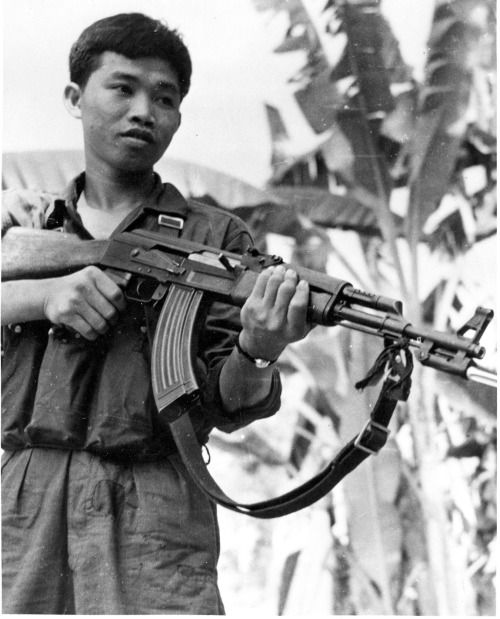 Owing to their vast industrial capability, the Chinese produced millions of the Type 56 and Type 56-1 variants. Early Chinese support for North Vietnam meant that many AKs supplied to North Vietnamese soldiers were of Chinese origin. Indeed, of all AKs captured by American soldiers, most were Type 56 variants. There is a small distinction between the Type 56 and Type 56-1. While both are variants of the AKM, meaning both have replaced milled receivers with stamped receivers, the Type 56-1 has a folding shoulder stock and the bayonet removed for ease of transportation.

In RS2: Vietnam, there are slight differences between these three variants represented in gameplay. The AKM boasts an open iron sight, allowing for easier target acquisition, and is very slightly more accurate. However, the Chinese variants feature lower recoil characteristics, and the stock folding capability of the Type 56-1 hastens ADS time. Although these differences are admittedly minor, their in game stats are different enough that engaging discussions could be held.

A subsequent step in the long chain of iterations, the MAS-49 was part of the French’s answer to the need for modernized weaponry post World War Two. Capable of enduring harsh service environments, the MAS-49 was introduced with improvements to the intricacies of the design. With the number of bolt moving parts reduced to six, this gun required mere seconds to disassemble and could be easily cleaned. 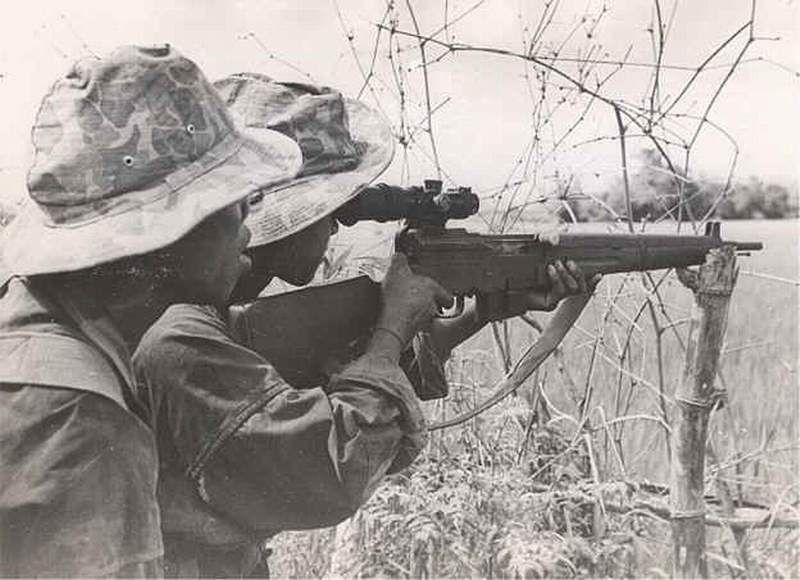 Strangely enough, that this gun is featured in RS2:V seems to be an anachronism. The majority of MAS rifles used by North Vietnamese soldiers were MAS-36s captured from raided French supplies abandoned in the First Indochina War. Sources indicate that the MAS-49 was quickly replaced by the later iteration MAS-49/56, which was lighter and could fit an attachable knife bayonet. While only 20,600 MAS-49 rifles were produced, the MAS-49/56 - the final MAS design used prior to the FAMAS - was efficiently mass-produced, attaining a total of 275,240 rifles issued in twenty one years.

Created with a machine stamping process that allowed efficient mass production, the MAT-49 - chambered in 9x19mm Parabellum - addressed an urgent need for a compact weapon to arm airborne and colonial forces. Designed with a low production cost to alleviate the post-war French military’s recovery, the MAT-49 derived inspiration from the American M3, and much of the latter’s DNA can be seen in the MAT-49’s stamped lower assembly. In its thirty years of production, eventually being obsoleted by the bullpup FAMAS in 1979, about 700,000 were produced. Easy to carry, easy to clean, and easy to fire, the MAT-49 was one of France’s most prized weapons. 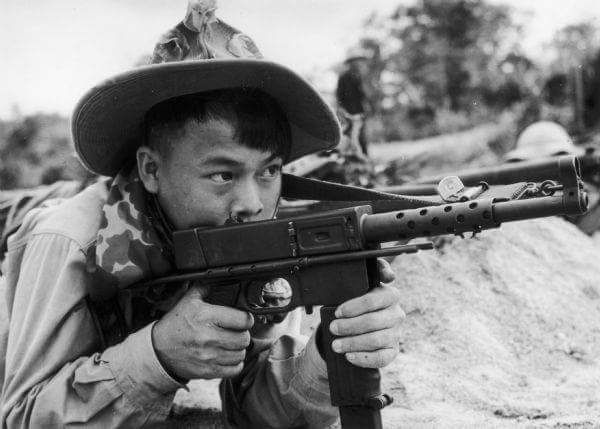 The PAVN and NLF both captured scores of these SMGs, from both battlefield scavenging and surrendering French soldiers. The MAT-49 would become one of the two most frequently used SMGs among Northern forces. However, as the 7.62x25mm Tokarev cartridge was ubiquitous, owing to supplies from the Soviets and Chinese, captured MAT-49s were often modified and re-chambered. Converted MAT-49s could be identified by their longer barrels and 50% higher rate of fire.

In game, both variants are available, aptly named the “French Original” and “Viet Modified”. Their performances match the characteristics of their respective historical counterparts. The Viet Modified fires much faster and does slightly more damage than the French Original can match.

The RP-46 is a variant of the Degtyaryov machine gun, more commonly known as the DP-27. A light machine gun chambered in the same full-power 7.62×54mmR that the Mosin-Nagant fired, the DP-27 was the primary light machine gun used by the Soviets throughout World War Two. In addition to being the standard squad LMG, the DP-27 was also, after several modifications, mounted on aircraft and fitted to almost all Soviet tanks. While this weapon was sturdy – capable of being buried under mud, dirt, or sand and still operating consistently – and used the same ammunition as the standard Soviet rifle of the time, the DP-27 had a fire rate at nearly half of those in its wartime rivals, the German MG 34 and MG 42 counterparts.

While the DP-27 boasted a distinctive silhouette, the weapon’s reliance on pan magazines begot a myriad of issues. The 47-round capacity neutered the DP-27 system as a support weapon. The round shape inconvenienced transport and left the magazine prone to damage. Other issues also emerged from factors outside the magazine shape. The bipod was weak and fragile if poorly handled, and overheating of the barrel led to recoil spring failure. These latter concerns would be addressed with subsequent iterations, but the most crippling weakness – the pan magazine – remained until the advent of the RP-46.

The RP-46 arrived with many boons. Chiefly among them was a successful transition to a belt-fed loading mechanism that finally allowed for sustained fire. Heavier barrels meant more rounds could be fired per barrel, reducing downtime in replacing those overheated. Additionally, the absence of pan magazines greatly reduced the weight of the machine gunner’s full kit – gun and ammunition – by ten kilograms.


In RS2:V, the DP-27 and RP-46 are available to NLF and PAVN forces, respectively. As the latter is a variant of the former, both weapons share very similar characteristics. Their damage and fire rate match, while the DP-27 has slightly better recoil statistics. Fortunately, because a Northern player can only either be of the NLF or PAVN factions, one will never have to choose between these two weapons.

True to real life, the volume of weapons available to the NVA is staggering. Boasting access to differing weapons of French, Russian, Chinese, and even American origins, NVA players have no shortage of toys. A rifleman on the South can choose between either the M16A1 or his faction’s battle rifle. In contrast, the opposing NLF rifleman has the choice between three AK variants, the marksman’s SKS, the antiquated Mosin-Nagant, the captured MAS-49, and even the M1 Carbine. While the weapons available to the North may be inferior to their Southern counterparts, NVA players can enjoy greater tactical flexibility, derived from their vast library of arms.

Stay tuned for the next part covering the weapons of the United States, Australia, and South Vietnam!