The Battle of Chosin Reservoir

Some historians call the Korean War, a “forgotten war” due to it being overshadowed by other conflicts involving the United States during the 20th century. As we know, World War Two and the Vietnam War are extensively covered by American movies and games. As gamers, we hardly had the chance to experience the Korean War, a highly dramatic episode in human history which shaped the world we know today. This article is meant to cover a dramatic battle which was probably one of the most important battles of the war: The Battle of Chosin Reservoir in late 1950.
Background (The Korean War)

In June 1950, the Korean People’s Army (KPA) of North Korea (DPRK) crossed the 38th parallel into the Republic of Korea (ROK), with the aim of unifying the country, sparking what is known today as the Korean War. Within a few months, the course of the war took a highly dramatic turn. By August, ROK and United Nations (UN) forces were pushed by KPA to a small perimeter around Pusan, on the Southeastern most coast of South Korea, almost losing Korea entirely to KPA forces.

The total annihilation of ROK was saved by an operation in Mid-October 1950 known as the Incheon landing. Under the orders of General Douglas Macarthur, the UN successfully launched an amphibious attack on Korea’s Western coast at Incheon, near Seoul. This soon resulted in DPRK forces being pushed back all the way toward the Yalu River and close to the border with the People’s Republic of China (PRC). By September 1950, China became increasingly threatened by the UN forces, which did not seem to have any intention of stopping at the 38th parallel, and continued to occupy North Korea. At this point, the UN forces were so close to the Chinese border that Mao Zedong and his colleagues suggested a military intervention. China sent a force of 1 million troops, called the People’s Volunteer Army (PVA), entering Korea in late October of 1950.

However, this intervention was at first unexpected by the UN troops… they had for months, only fought North Korean troops. The U.S high command ,particularly, had little idea of the Chinese military mobilization in Manchuria. In North Korea, allied troops were still assembling with the intention of advancing to the Yalu River, and completely occupying the DPRK, just as the DPRK almost occupied all of the ROK a few months ago.

Course of the war

The Battle of Chosin Reservoir

In mid-november of 1950, as U.N troops marched North, they passed the Chosin Reservoir, which became the scene of one of the most dramatic episodes of the war. The Chosin reservoir is located in what is today DPRK territory, in the Northeast of Korea just 100km south from the Chinese border. The Chinese troops, fresh out of the Chinese Civil War, meanwhile, were mobilizing themselves in force of up to 1 million, and reinforced their divisions to cross the North Korean border with Manchuria. 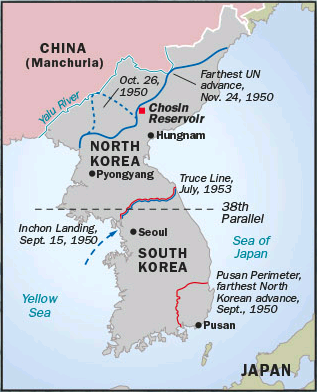 The 9th and 13th Army from China, totalling around 150,000 troops, and consisted of troops fresh from the Chinese Civil War. Most forces crossed the border almost undetected. This massive force of Chinese volunteers, soon found themselves encircling the UN’s X Corps, a force of 30,000 troops around the lake. It was the Chinese intention to drive the UN forces back to South Korea and possibly off the peninsula entirely. Mao Zedong, the Chinese leader, saw the UN forces as a threat to Chinese security and put his best commander, Peng Dehuai, who had distinguished himself during the Chinese Civil War, in charge of the troops. 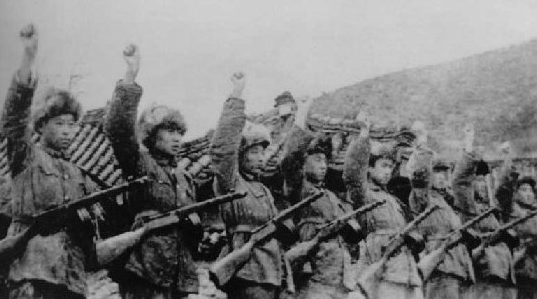 The X Corps, comprised of some 30,000 troops, started to assemble in Chosin. The X Corps was mostly comprised of the veteran 1st Marine Division, with some Army battalions and ROK troops. The 1st Marine Division were one of the most elite troops the U.S could offer. They already were famous at the time, renowned for its victories during the Pacific War against the Japanese at key battles such as Guadalcanal, Peleliu and Okinawa. Moreover, the 1st Marine Division had also faced important battles at Pusan and were tasked to lead the amphibious assault at Inchon. The troops were in assault positions expecting to push the North Koreans to the Yalu river, under orders from its commander, General Almond. Under orders from General Macarthur, The U.S troops were not expecting much resistance, after finding themselves victorious on numerous occasions after Inchon. Like Macarthur, Almond was confident in being able to reach the Yalu by Christmas, and spread his forces thin. At the same time, the U.S Eighth army on the Western flank of Korea was forced into full retreat by the numerical superiority of the Chinese, crippling any form of reinforcement. The X Corps was heading into a situation of destruction, with the 1st Marine Division being under threat of encirclement. 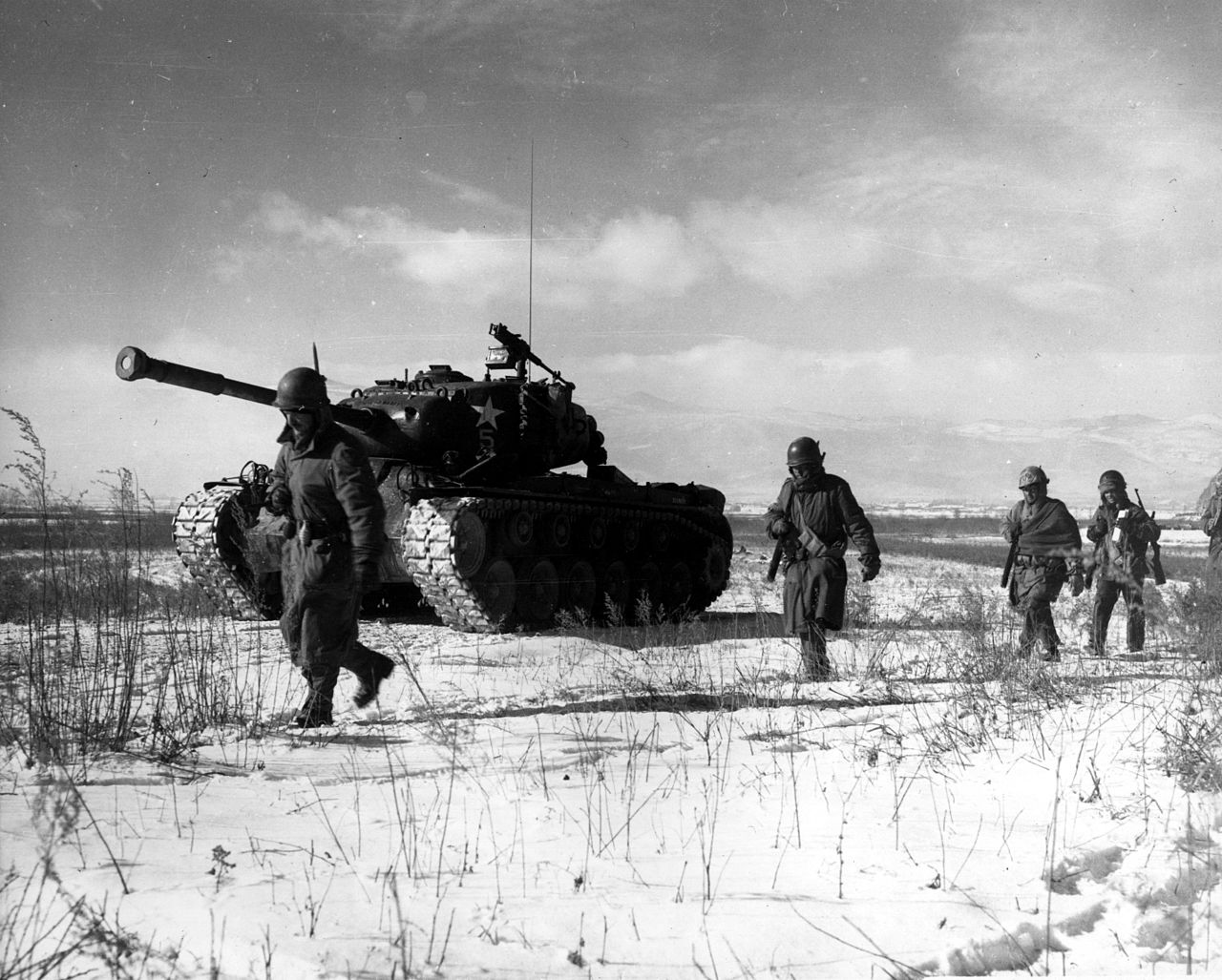 Troops of the 1st Marine Division at Chosin

Course of the Battle Map of the Battle

General Almond however, was unaware of the Chinese intentions and troop sizes. The Chinese knew full well that the 1st Marine Division was operating in the area, and intended to encircle and destroy it to cripple American morale in the war. Destroying a crack unit like the 1st Marines would, as Chinese high command measured, test the American public’s approval of the U.S intervention in the war. Marshal Peng Dehuai dedicated a total of 10 divisions with orders to surround and destroy the single Marine division, attacking on the night of 27th November.

Meanwhile, as winter approached, the temperatures dropped to around -35 degrees Celsius. The Marines, once informed of the attack, fortified their positions. The Chinese attacked throughout the night across all major marine positions. Contrary to popular belief and portrayals in many Western (and ROK) movies, the PVA did not attack in human waves. According to historian Edwin Simmons, the PVA operated in compact groups of 50-100 men, about the same size as an U.S Army company. Chinese historical sources in Mandarin also confirmed this to be true. This in fact gave the Marines time to organize a hasty retreat, since the Chinese attacked in small groups that failed to overwhelm any positions on the night of 27th.

General Almond then made a risky decision; withdraw all the forward positions along with their equipment and heavy weapons toward a better position at Hagaru-ri. Almond, observing the Chinese movements, realized that the main objective was to destroy the 1st Marines, and used other forces in the area to distract the Chinese army. On November 29th, Almond met with President Truman who decided to abandon the idea of a unified Korea, but still wanted to save the ROK. The X Corps’ new objective was to retreat to the nearest port at Hungnam in the Southeast, lest be destroyed by the PVA. 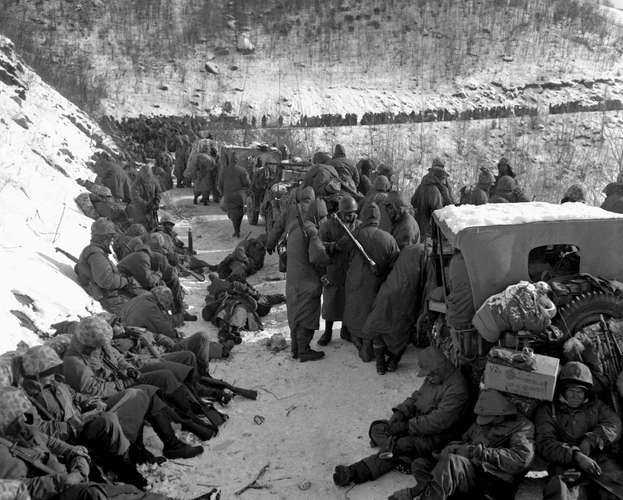 On December 1, the Marines started to withdraw with its rear going to Hungnam first, while the frontline troops at Hagaru-ri held the line. However, the Chinese redirected troops to cut off the convoy route and close the roads. General Oliver Smith, commander of the 1st Marines, was quoted as saying “If You Stopped Moving, You Froze”. Both sides were caught in brutal terrain at severe temperatures, but had no choice but to continue fighting. The Chinese, despite old weapons and inadequate supplies, kept on attacking the Marines to demoralize them. For the Americans, it was a miracle that by December 2nd no units were captured or destroyed, and continued to make their way down the snowy road to Hungnam, with only a single M4A3 Sherman leading the convoy.

Throughout the next two weeks, the U.S and ROK forces organized themselves to retreat in a bounding fashion. The Chinese ultimately failed to cut off any part of the route south of Hagaru-ri. One crucial advantage that the U.N had was the use of F4U Corsairs equipped with night-fighting capability. Dropping napalm and strafing Chinese positions for 24 hours, these sorties were pivotal in saving the 1st Marine positions from being destroyed. By December 7th, some divisions of the PVA 9th Army had been virtually destroyed, unable to counter the U.S in the air.
Finally, the 1st reached Hungnam port on December 11th , after 2 weeks of fighting, with the withdrawal complete. The Chinese had lost their morale and momentum, with both sides suffering severely from the cold. The 1st Marines was able to evacuate via the port at Hungnam.

Aftermath of the Battle Map of the Retreat

Subsequently, Hungnam was captured by the Chinese, which had taken massive casualties and failed in their objective to destroy the 1st Marines. The Chinese failure with high casualties meant more time needed to reorganize and reinforce which slowed their advance toward Seoul. With most of North Korea captured by the Chinese and North Koreans, they soon captured Seoul (again) in January 1951. Ultimately the successful retreat of X Corps, was able to reinforce the lines and allow the UN forces to reorganize themselves, with Seoul yet again recaptured by the U.N forces in July 1951. Thereafter, a stalemate ensued, which establish the borders of North and South Korea we recognize today.

The action at the Chosin Reservoir in late 1950, saw the X Corps put up a ferocious defense that ensured their survival, and contributed immensely to the survival of South Korea. Many historians agree that if they had been successfully encircled and fallen, there might not have been enough momentum to defend Seoul and rest of the ROK from being captured by the PVA and KPA.