An explosion in Squad

I have been pretty vocal in Easy Co. about saying that the combat engineer is the best AIT. Now personal bias aside from my background as a CE, I think that there is one fundamental argument as to why this is the case. The CE is the only infantry based AIT that can engage and kill any target that the player may come across. All other AITs must be in fear of the enemy tanks or IFVs, but not the combat engineer. While the CE still has to be cautious, those vehicles must instead fear the CE, despite being in a vehicle impervious to 90% of the enemy team. In fact, that is a CE’s primary purpose here in the 29th- to kill enemy vehicles. However, this is just combat engineers in the context of drills within the 29th. Given that the 29th is a realism unit based off of the US military, one may wonder, “What do CE’s do in the US Military today?” As it turns out, there is a bit of overlap. However as one might expect, the role of a CE in the real world is quite a different one to the world of the 29th in other aspects.

The coolest thing about being a combat engineer, in my personal experience, is shooting rockets at enemies and having the enemy vehicles or infantry rage at you over Steam for abruptly ending their life in that round. Here in the 29th, a CE’s primary role in drills is to hit targets with rockets. Although unlike other AITs, the combat engineer has more diversity and depth to its role through the use of the sapper. This role expands the CE’s capabilities by granting them access to mines, IEDs, explosive charges, sandbags and razor wire. Similarly in that regard, combat engineers in the real world are also a very diverse MOS. While combat engineers are trained how to use shoulder fired rockets to engage enemies on the battlefield, they are also taught a plethora of other skills to make them more useful on the battlefield than just combat troops.. Whereas 29th CE’s are more focused on the combat aspect of combat engineering, CE’s in the real world are engineers first and combat troops second.

Combat engineers are trained in several different aspects of construction and destruction that is relevant to combat operations. On the construction side of things, a CE has to know how to, well, be a construction worker. One of their responsibilities is constructing what are known as SEA or SWA huts from lumber and plywood the way any civilian carpenter would. These are rudimentary structures that are used for giving troops at a FOB a roof over their head to get out of the elements.. In addition to wooden construction, CE’s are also versed in concrete for construction purposes and airfield repair. While this may not be as glamorous as blowing up vehicles, it is still a critical part of combat operations.

However, that is not the only type of construction that engineers are trained in. They are COMBAT engineers after all, and that means that combat construction is one of their primary duties. There are much more construction efforts that go on in a battlefield than one might think. Trenches, bunkers, defenses, tank traps, wire obstacles, and whatever needs to be created on the battlefield are all the responsibility of the engineers. It goes without saying that these are some highly important assets to providing safety for friendly forces as well as being a thorn in the side to all types of enemy forces. How these assets are used in real life can be compared to how they are used in Easy Company. While it is the responsibility of the CE’s to create these types of fortifications and obstacles, they work hand in hand with the leadership of the infantry in order to get it done, similar to how the SL’s in Squad are the ones who place the objects down before the rest of the team builds them. It’s more of a tandem effort in the real world as the leadership have a plan and an idea in mind and the CE’s are the ones who make that plan happen, but also advise the leadership on how to best employ said fortifications or obstacles on the specific terrain they may find themselves in. Also much like Squad, the common rifleman is not left out of the loop. Riflemen have shovels, and in the time-sensitive environment of a combat zone the extra e-tools are always needed for assistance. The key difference here though, is that the CE’s are not limited to using the sandbags and wire that we see in-game. Their capabilities in that regard go all the way up to the emplacement level and even in reshaping the earth around them.

There is one construction effort that CE’s in the real world handle that does not exist in the 29th, and that is bridging. Bridging is one of the tasks that combat engineers take care of that is truly independent from aid or overlap from the infantry. Bringing armored vehicles as well as supplies over a gap in the earth is a critical need for any combat operation to succeed. Rivers, canyons, and rough terrain are everywhere on Earth, and they must not stand in the way of the combat troops. To tackle this, the US military has invented an ingenious alloy of aluminum, magnesium, nickel and a few other metals that works as a super lightweight, flexible and strong material that is fabricated into more or less a giant set of legos made for bridging gaps from a friendly near side without needing a presence on the far side. Combat engineers often take pride in being able to bridge any gap they come across in hours with their giant lego sets, and it is quite a sight to see when they do. 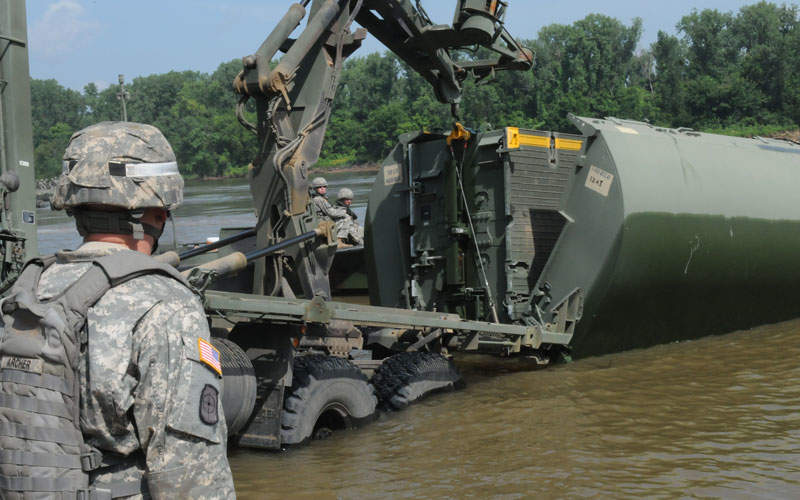 However. construction is not all that CE’s are capable of. Oh no, in fact, where a combat engineer truly shines is destruction. You need a bridge blown up?Call the engineers. Do you need a building levelled? Engineers got your back. Do you need a 40ft crater blown into a road? Engineers. While infantrymen do use breaching charges and the like to open doors, CE’s are truly the kings of explosives on the battlefield. While in Squad a CE really only has a stick of C4 and maybe an IED at his disposal, the explosive kit of a combat engineer in the real world is vast and versatile. There are quite a number of different types of explosives used. From high explosives like C4 used to cut metal structures or breach into buildings, to low explosives like ANFO for moving earth and creating obstacles, as well as a whole host of other explosives for different purposes. CE’s are also trained to use explosives in some more nefarious ways that you may associate with the irregular factions in-game such as creating booby traps. However, on the flip side of this, CE’s are also trained in recognizing and eliminating booby traps and other types of hidden explosives like IEDs and mines. Some of these techniques are very creative. For example, there are a few ways to clear a minefield ranging from rolling up your sleeves and poking into the ground with a metal stick to locate mines (yes this is real), to using a metal detector to search for mines and IEDs (also real), to using a string of C4 attached like a chain to the back of a rocket to clear a line through a minefield. When it comes to IEDs, combat engineers tend to steer clear, as they are often much more complicated to deal with. Instead, CE’s do the reasonable thing and let those crazy fools in EOD have a crack at getting rid of the IEDs. 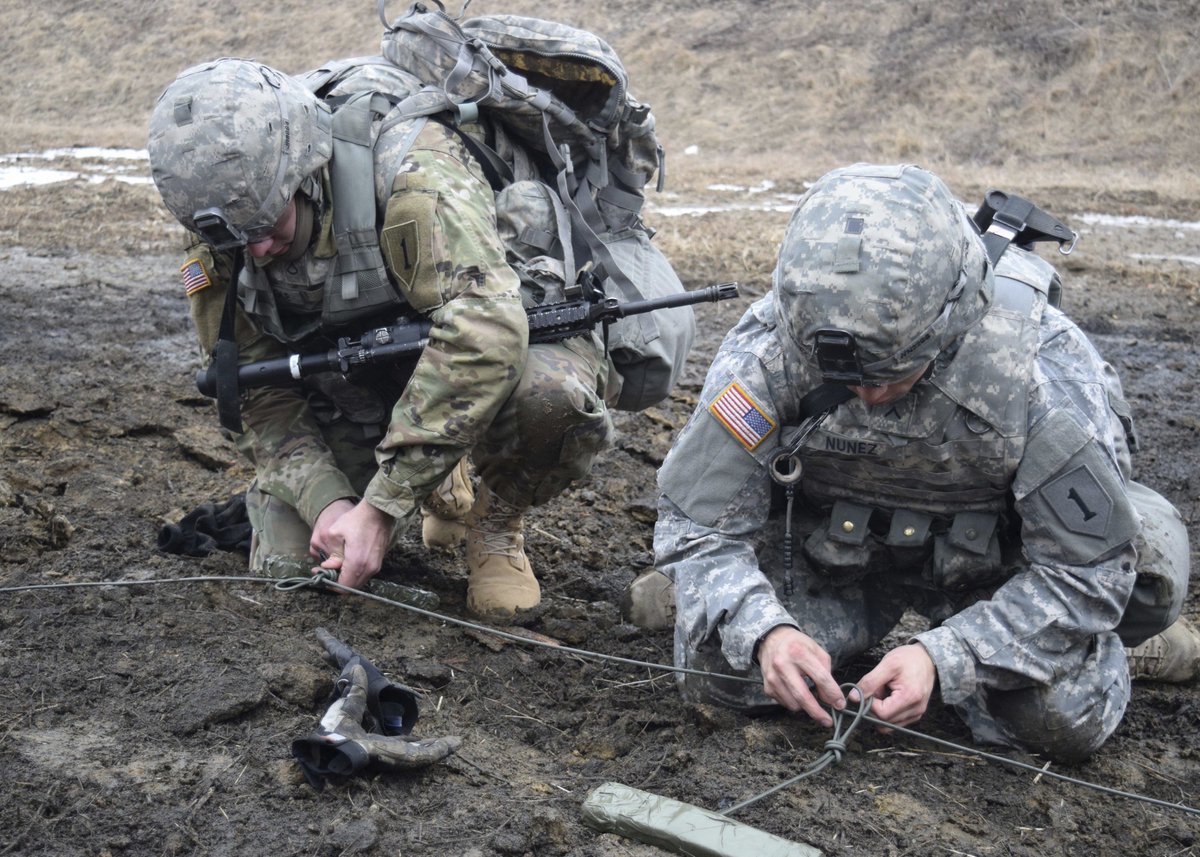 When you look at it in totality, the combat engineers of the real world and of the 29th do share a lot in common. Although, CE’s in the military are a lot more engineer than combat, and CE’s in the 29th are a lot more combat than engineer. However, their overall purposes are similar when applied to their separate worlds. The brave men and women that serve as combat engineers in the U.S. military today are much like ours here in the 29th, only more so, in that 29th CE’s are a bit of a snapshot or microcosm of the ones stationed around the world.