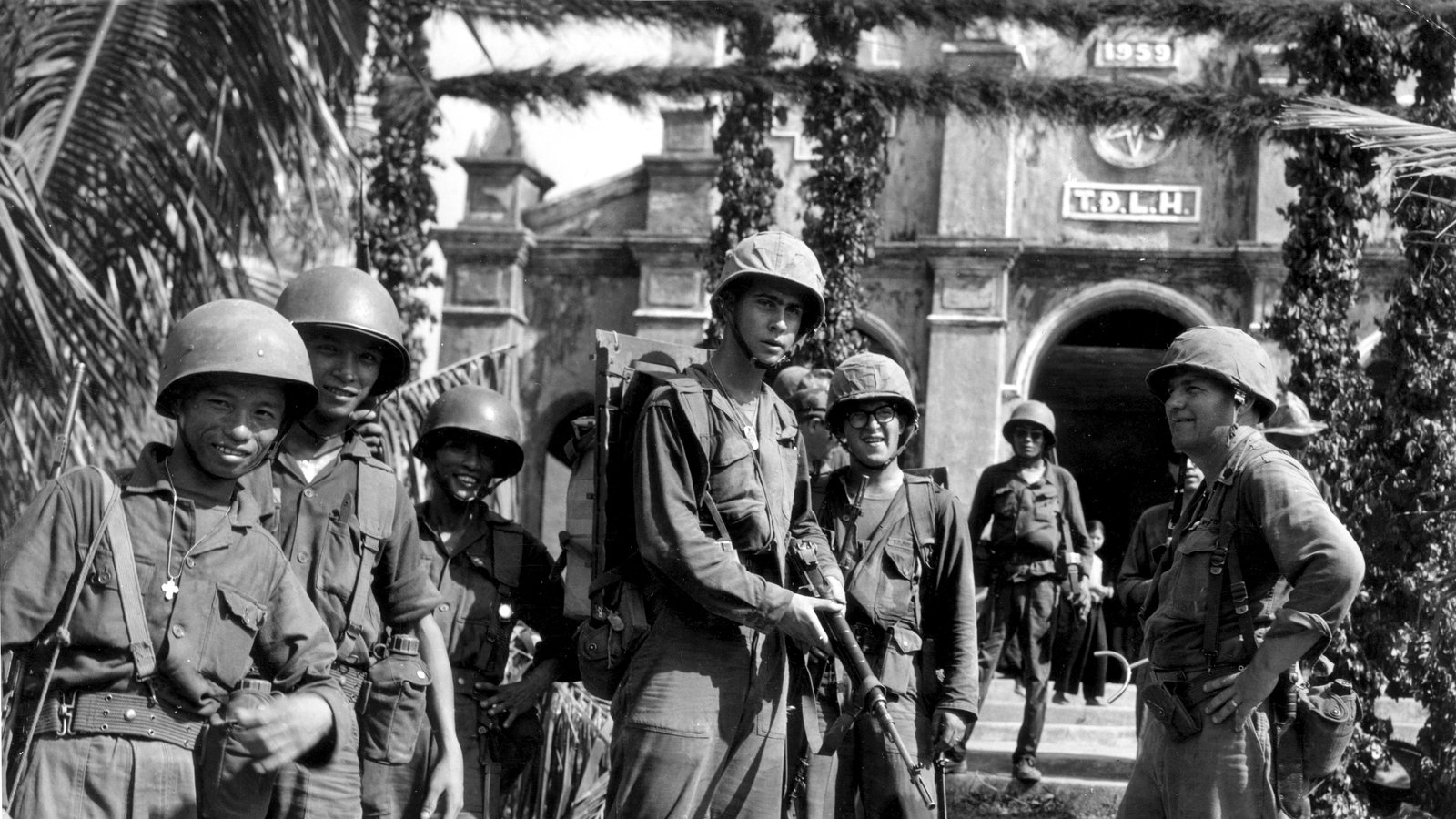 Despite being represented by three nations, the forces of South Vietnam have a lower weapon variety than that of the North Vietnamese. For the U.S. Armed Forces, Australian Army, and Army of the Republic of Vietnam, a large proportion of the weapons available in RS2 are of American origin. However, there is a juxtaposition found in the American relics from WW2 used by the ARVN with the most modern armaments available to the U.S.

Replacing the iconic M1 Garand as the standard-issue rifle in 1958, the M14 rifle was the final battle rifle issued in mass service to American forces. While the M1 Garand was among the most advanced rifles in its time, by the waning months of WW2, modifications were already being made to the design. Among these modifications included the implementation of automatic fire, box magazines to include additional bullets, and redesigns of gas ports and regulators for better functionality in extreme conditions.

Seeing service in Vietnam for a period of around eight years, the M14 performed adequately; the weapon’s full-power cartridges provided massive penetration power and range. However several issues, stemming from the environment, were present. The length and weight of the M14 led to its users being frequently impaired by dense undergrowth, and the wooden stock had a tendency to swell in the heavy moisture, affecting accuracy. Fiberglass stocks were produced to alleviate these concerns, but the weapon was soon replaced by the M16. 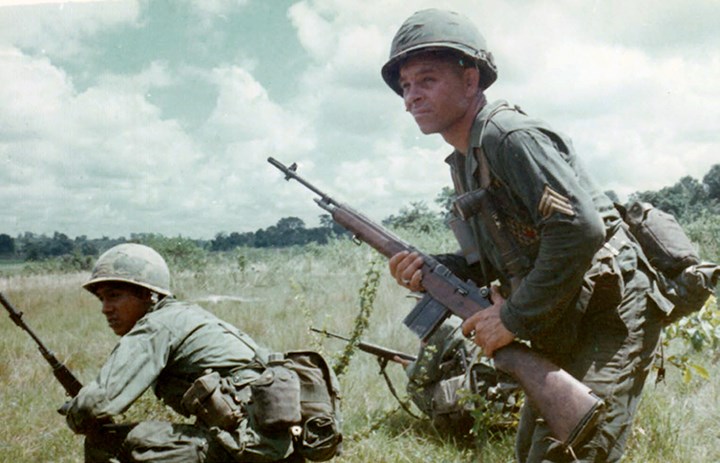 Despite no longer being the standard-issue rifle, the M14 remains in limited service throughout the U.S. military, with civilian variants also used for sport. In its Rising Storm 2: Vietnam representation, the M14 has no concerns with accuracy or ergonomics. Although locked to semi-automatic fire, the weapon is capable of one-shot kills and boasts immense stopping power over its M16 alternative.

Ordered as a replacement by direction of Robert McNamara, overpowering objections from U.S. Army officers supporting the M14, the M16 first entered service in 1967. Lightweight, produced with aluminum alloy, and chambered with intermediate cartridges in a world where traditional rifles were forged from wood and iron, the M16 – earning monikers such as “Mattel-16” and “poodle shooter” – was greeted with much derision from its users.

Indeed, the M16 had severe reliability concerns that would soon be amended by the subsequent variant, the M16A1. The weapon had a malfunction rate of two per one thousand rounds fired, which was only exacerbated by the harsh conditions and poor logistics found in the Vietnam War. Three factors primarily led to widespread extraction failures and malfunctions: a change in powder type from testing environments resulted in differing pressure curves, models lacking chrome-plated chambers, and lax maintenance founded on the misconception that the weapon was self-cleaning.

With 80% of soldiers reporting stoppages and anti-war protests gaining fervor, the M16A1 was quickly introduced in 1967. Issued alongside cleaning kits, the M16A1 boasted many modifications that addressed its predecessor’s infamous reliability issues. A 1968 Department of Army report found that the M16A1 found widespread acceptance by U.S. troops in Vietnam, with 85% preferring to carry an M16 or its carbine-length variant, the XM177E2.

In RS2:V, the M16A1 variant is available. In real life, out of concerns for magazine feed failures, 20-round magazines used in the M16 were not fully loaded, which is also represented in-game as selected historical accuracy. While the M16A1 comes with 20-round magazines, prior to Late War, the maximum capacity in game is 18+1. Authentic to real-life, the M16A1 features low recoil characteristics and provides the player with more ammunition than is available to a M14 user.

Adopted in 1957 and issued beginning in 1959, the M60 has served with every branch of the U.S. military. Seeking to address disparities in suppressive firepower from WW2, particularly in those present against German doctrines, post-war America began a search in the late 1940s for a new, lighter machine gun. Partially derived from German machine guns of WW2, early prototypes of the M60 conglomerated many design principles from the firearms available at the time. Incorporating a semi bullpup system from the FG 42 with the belt feed system from the MG 42, the T161 system was born. Tests and revisions – including the demand to adopt the new NATO standard 7.62mm – led to the final T161E3. Both out of a desire to avoid licensing fees and bias towards domestic products, the U.S. Army adopted the T161E3 over foreign competitors, designating it the “M60”.

While versatile, capable of firing shoulder-mounted, vehicle-mounted, on a tripod, or on a bipod, not even the M60 was invulnerable to the harsh climates of Vietnam. Critical parts of the weapon wore out quickly, and the weapon’s light weight rendered it fragile to damage. As a result of the weapon's volume of fire with the humidity and mud of the environment, diligent maintenance was necessitated. Despite the weapon’s weight and ammunition consumption, the M60 boasted a mixed reputation, with many period American forces appreciating the weapon’s capacity to provide overpowering suppressive fire. Alongside the new M16, the M60 became a familiar sight in wartime photography and post-war cinema, owing to the weapon’s distinctive silhouette. 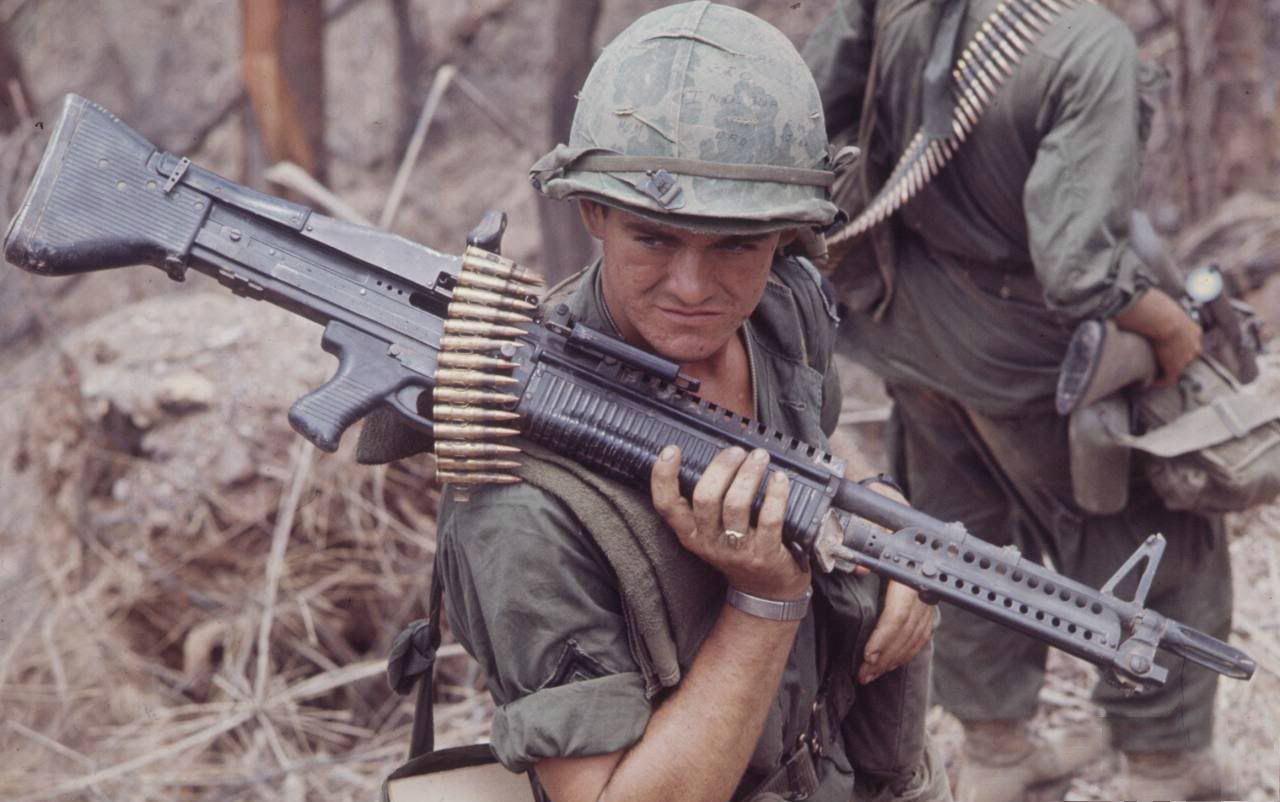 Widely adopted by many NATO countries, the FN FAL entered service in 1954 with the Australian Army under the designation “L1A1”. To provide common operational and administrative procedures for ease of logistics and communication, the NATO states produced many Standardization Agreements, STANAG for short. As part of the standardization effort, the FAL had select-fire capability, removable magazines, and self-loading function regardless of ammunition. Originally designed to fire intermediate rounds, inspired by the German Strumgewehr, the prime contender was the experimental .280 British, a highly capable caliber balancing weight and rifle-grade ballistics. Early developments of the FAL were forced to abandon this cartridge to appeal to the Americans, who demanded a munition no smaller than .30 calibre. For this reason, the early model T48 rifle, chambered in the 7.62mm NATO cartridge, was developed, although the U.S. eventually dropped the FAL in favor of the M14.

However, from its first production in 1953, the FAL was adopted by over 90 countries and throughout NATO states. The FAL is among the most produced firearms in history. During the Vietnam War, the L1A1 SLR was the standard-issue rifle for the Australian Army. Citing better reliability and higher stopping power, Australian forces greatly preferred their larger caliber weapon over the American M16. With great experience in jungle warfare, owing to earlier conflicts, the Australian forces considered the strengths and weaknesses of the L1A1 and its larger caliber more appropriate with their tactics and doctrine. 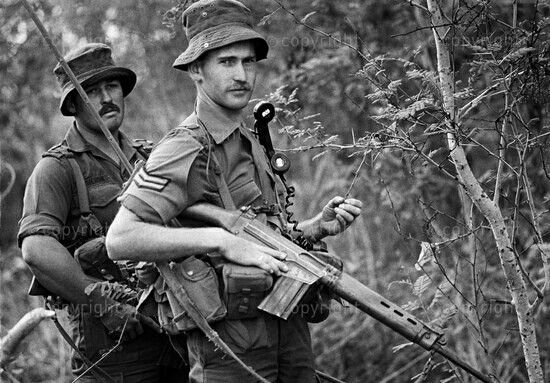 In coordination with Canada, Australia developed the L2A1 as a variant to serve as an automatic rifle in a support role. Differences in the design included a heavy barrel, a different front sight, a handguard that also served as a foldable bipod, and unique 30-round magazines. This variant was only used by Canadian and Australian forces, as Commonwealth states primarily used the Bren light machine gun for the support role. As the Bren had changeable barrels and a greater weight, many considered the Bren to be superior for fire support.

Regardless, towards the end of the 20th century, the benefits of intermediate cartridges became increasingly well-known. In comparison to more modern assault rifles, the FAL was too long, too heavy, and too limiting. As years progressed, this weapon designed for universal use was itself replaced. The Belgians adopted the FNC, the Austrians the AUG, the British the L85 – all of which were chambered in the intermediate 5.56mm NATO.

In RS2:V, a stark contrast to the dichotomy between the M14 and the M16, the L1A1 combines the best of both worlds – superior stopping power alongside very serviceable recoil.