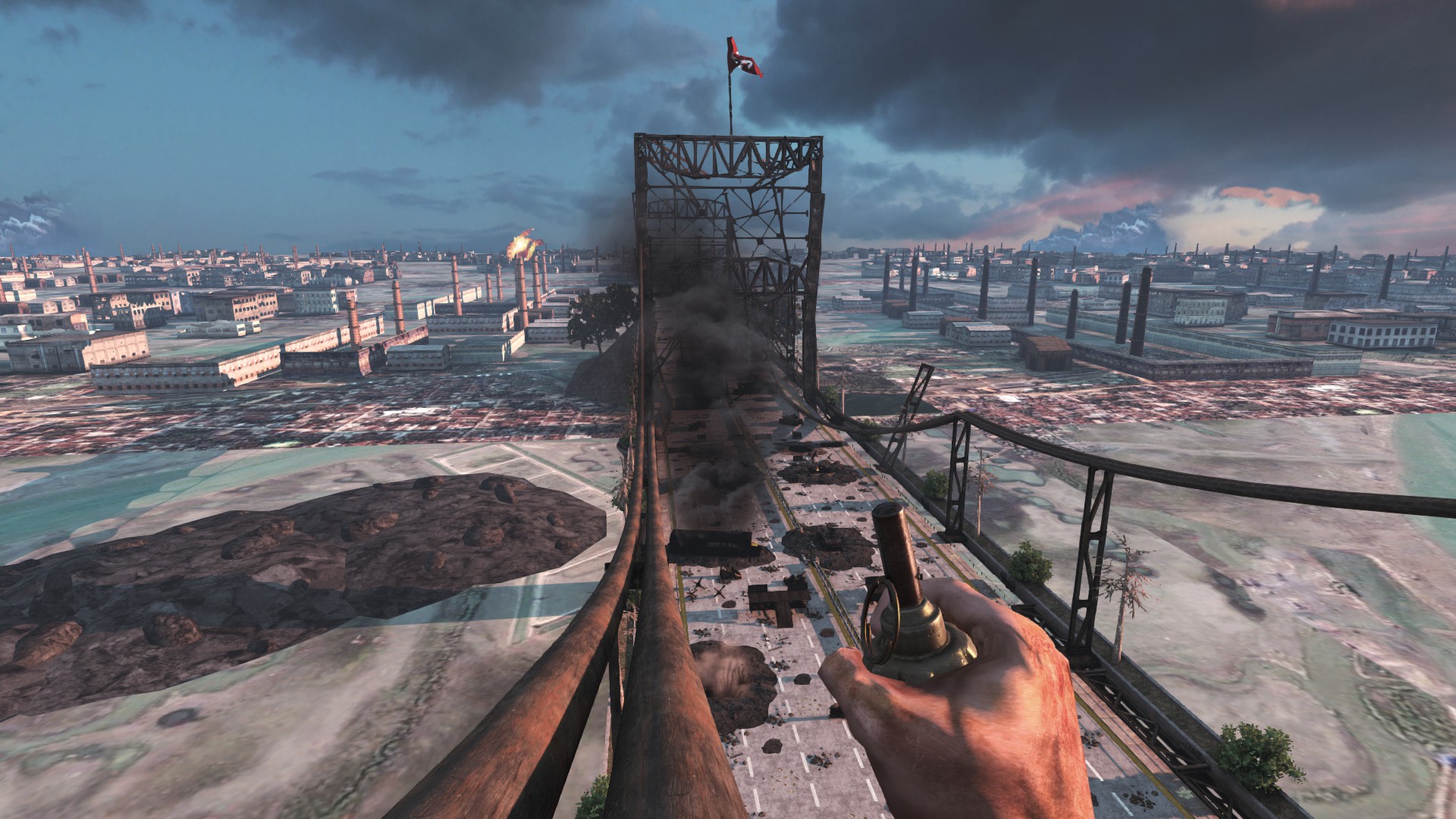 Extract from Chapter 12 "The Volga Crossings" from Anthony Beevors "Barbarossa"

Meanwhile the reconnaisance gruppen fanned out along the Volga to the north and south of the city, searching for a viable bridge or crossing that that 6th Army could use to envelop the city in a classic 'Kesselschlacht'. Approaching Jarostosk to the south on the 27th August, German troops were within 300m of the bridge when it was destroyed by explosive charges laid by Russian engineers. The next day, the bridge at Milosk was destroyed by Luftwaffe aircraft under orders to target enemy logistics and troop movements. To Paulus in his Headquarters vehicles it seemed like he would never be able to cross the Volga.

Then, on the 29th came news from Magnitorsk 15km north of Stalingrad, where a large road bridge had been built in 1940 replacing the ferry crossing shown on German maps of the area. The reconnaisance gruppe of the 29. Mot. had found this crossing crammed with fleeing Russian troops and civilians and was attempting to cross. The bridge itself was almost unguarded – in the confusion of the retreat the engineers assigned to destroy the bridge had brought no explosives with them – with only a single rifle company in place and almost no heavy weapons. The initial German assault onto the bridge met nonetheless with difficulty. The bridge was covered in abandoned vehicles, equipment and other detritus of war and in places had been holed by bombing and artillery fire making the going treacherous.

The first attack failed. Using the last of their Anti-Tank weaponary the Russian infantry destroyed 7 German light tanks and reconnaisance vehicles as they pushed through the wreckage on the bridge. The Gen. Buerdow - the local German commander, not-knowing that the Russian troops had no ammunition left for their anti-tank guns reasoned that since the bridge was now impassable to vehicles due to the wreckage, it would have to be stormed by his infantry. Meanwhile his counter-part on the Russian bank was desperately calling for explosives with which to destroy the span, knowing that one more concerted rush by German forces may be all that was required to push his troops from the bridge.

At 1230 the first German infantry moved cautiously onto the bridge, which at the time was held by just 12 enemy riflemen. As they moved forward small-arms fire increased in intensity but the sheer weight of numbers of the German forces began to tell. Rifle fire crackled along the bridge with each rush forward of the grenadiers, often using smoke grenades to cover their advance. The Russians fell back to a series of prepared positions on the final third of the bridge, inviting the German troops to move away from the protective fire of their comrades in the factories on the west bank. As the German troops moved up they had fire rained upon them by sharpshooters hidden high up in the towers and cables of the bridge. Despite forcing the Russians back to the east bank, the German attack was spent and without the numbers required to establish a bridgehead, they fell back and regrouped for a second effort.

By 1300 the Russians had scraped together another skeleton force with which to hold the bridge and had brought up adaquate ammunition with which to supply them, but still no explosive charges. The next German assault was pressed even harder, now with prior knowledge of the Russian defensive positions they were able to suppress them and approach closely, using grenades to force the defenders out of their cover. Meanwhile marksman watched for shapes silohuetted against the sky - high up in the cables of the bridge - neutralising the threat of Russian snipers. In a matter of minutes the Russians on the bridge were dead, dying or fleeing. For a short time it seemed Paulus had found his way across the Volga, his way to the Kesselschlact, his way to victory.

The night of August 29th/30th is one of the great 'What Ifs' of military history. A single defining event with huge corresponding consequences. Had the Germans been able to hold their bridgehead, reinforce it and break out – as they surely would have done against the risible Russian opposition on the east bank – then Russian lines of communications with Stalingrad would have been cut and the city reduced like many before it. As it is, the fog of war conspired to rob Paulus of his prize.

Around 2345 hrs a formation of 16 He111 from KG 372 was enroute to bomb the docks at Astrakahn in an attempt to destroy materiel being moved up the Volga. Like so many early war night bombing missions however, it went completely aray. The lead aircraft was flown by Oberst. Sebastian von Zeven, an irrascible veteran of Spain and the Norwegian Campaign. A brand new commander, he had been brought into what was considered an ill-disciplined and incompetent gruppe in order to bring it back to frontline capabilities. He had started by cashiering a number of pilots, instituting iron-discipline amongst those who remained and even publically beating the navigator of his wingman for suggesting an incorrect course correction. This would prove to be the undoing of the entire German 6th Army.

The compass in Von Zeven's aircraft was defective, twisting slowly anti-clockwise as he flew. With the aircraft trimmed to follow a specific heading this resulted in the slightest of banking turns to the port side. Although numerous pilots in his formation noticed the problem none dared to speak out or question their leader and followed his turn. After 2 hours of flight from their airfield at Ilyashk they approached what should have been the Astrakahn from the south. Instead they approached Magnitorsk some 300km away from the SE. Von Zeven couldnt believe his luck, conditions were poor but through the clouds he could see the water glinting away ahead of him and the stark outline of what seemed to be a large ship at anchor, he gave his orders and the formation pressed forward on their bombing run.

For the German engineers – struggling to both reinforce the tortured steel framework of the bridge and to clear it of the detritus of war – it seemed as though the world had ended. Huge explosions rocked the town and lacking better cover the troops on the bridge streamed west to the presumed relative saftey of the German lines. The handful of troops who had crossed to the east bank, seeing those behind them streaming away and with bombs landing around their position fled west across the bridge. The bridge itself was hit 6 times by 250kg bombs whilst the German positions on the westbank was hit as well, fires breaking out which required a short evacuation of the Kylmann Boatyard where Buerdow had made his headquarters.

As light dawned on the 30th August, the Bridge at Magnitorsk still stood, albeit audibly groaning under the strain of it's own weight. Visible upon the bridge were figures in brown uniforms scuttling around the supports and cables. Buerdow, soot-blackened after he had joined his men firefighting and being unable to contact his bridgehead on the east bank understood who they were: Russian engineers! He immediately ordered a repeat attack before the enemy could wire the bridge to be blown. 3 whole Companys were commited to the attack, their commanders instructed in the strongest possible terms that their men were to disregard casualties and get across the bridge as quickly as possible. Buerdow sent his adjutant – a stormtrooper veteran of Unternehmen Michael in WW1 – to lead the attack in to maintain it's vigour.

The Russian troops, who we now know numbered just 12 were completely overwhelmed. They had not yet finished their installation of explosive charges when the German stormed onto the bridge, firing as they came. Those nearest the western bank fought where they stood, sacrificing themselves to buy time for their comrades in the rear, who managed to throw a semblance of a defensive line together in the very middle of the bridge. The Germans rushed forwards and took huge casualties from accurate Russian fire, but they were undettered. Throwing smoke to cover their advance they came forwards again and grenades and bayonets succeeded in encouraging the Russians to fall back. Soon only a handful of Russians remained, clinging on to the final approach to the bridge on the Eastern Bank. A final German attack came in, and with nowhere left to run the remaining Russian Engineers fought and died where they stood. Ahead of those German troops of the 29. Mot. there were no formed Russian formations for 100km, the door was open for Paulus to make his move.

At 0745 hrs, a communique arrived in 6th Army HQ at Illyashk: "Magnitorsk Bridge captured, elements of 29. Mot. ready to exploit with your permission". A few minutes later as Paulus looked at his 1937 map of Stalingrad Oblast in confusion trying to find the bridge being referred to, came a second message: "Magnitorsk Bridge collapsed, beginning rescue efforts."

The bridge, for which so many lives had been lost and upon which fate of the 6th Army hung – although Paulus did not know it – had been irreprably damaged in the bombing raid by Von Zeven's misguided Heinkels. Even whilst the final German charge had so gallantly battled the Russians from the bridge it had been sagging its way to collapse. 67 German and 36 Russian lives were lost in the fighting, but over 100 Germans were lost as the bridge collapsed into the Volga. Stalingrad would stay unsurrounded, Paulus and his men would have to fight harder than they ever believed could be possible.