PFC Bae is an effective and influential soldier on a battlefield and continually performs at a high level. Recently PFC Bae displayed some truly unique technical prowess while participating in FnF. After talking with several people, on either team, regarding PFC Bae's efforts during these two fights it was clear that the PFC's skill had great significance and turned the rounds in the favour of his team.

It is my pleasure to award PFC Bae the Bronze Star.

PFC Wells said:
BLUFOR Forces rode in on 4 HEMTT transport trucks and offloaded approx. 24 men, 500 meters South West of the station. PFC Bae (assigned as marksmen using an Opfor SVD rifle) was positioned 600m due east of the station. PFC Bae spotted the attacking force giving the defending team ample time to focus the defense and prepare for the full frontal assault. PFC Bae was given free reign to move and fire on the enemy.

The enemy established a Base of Fire of 9 men with 5 machine guns just off of their dismount point and began dumping rounds towards the air station from elevation while the other 15 men maneuvered on the south side of the radar station. Under such extreme fire our defenders were forced to stay in cover and simply wait for the enemy to be on top of them. However, PFC Bae managed to get behind the 9 man BOF and eliminate the entire team using his rifle without raising suspicion by using the volume of enemy fire to mask his rifle report. PFC Bae also picked up an enemy radio to assist in eliminating the BOF team and to fire on the attacking force. This gave the defenders ample breathing room to clean up the straggling attackers without contesting the objective terminal.

PFC Drake said:
In Friday Night Fights, Round 2, 12/13/2019, PFC Bae deployed as a marksman. Under the command of PFC Wells, the platoon was ordered to defend Air Station Mike on Altis from enemy assault. True to form, PFC Bae was able to position himself on the enemy's flank, close the distance even though he was a marksman, and annihilate the lead elements of the enemy force, ensuring the defender's victory.

In Friday Night Fights, Round 3, 01/03/2020, PFC Bae deployed once again as a marksman. Under the command of Capt. Hill, Alpha Squad Leader, PFC Bae deployed to an inconspicuous location in the middle of a field southwest of the objective. While this might be a suicidal move for most infantrymen, PFC Bae perfectly chose overlapping sources of concealment, taking position in a spot in which the enemy would least expect him to be. As the enemy took the OP south of the objective, PFC Bae was able to engage at range and eliminate at least 5 enemy infantry. PFC Bae's neutralization of the west side of the OP allowed an assault element led by Tyler_Western to counterattack the OP, taking the defenders on the other side of the position. These combined actions, which PFC Bae set up for success, crippled the enemy attack and ensure victory for the defenders. 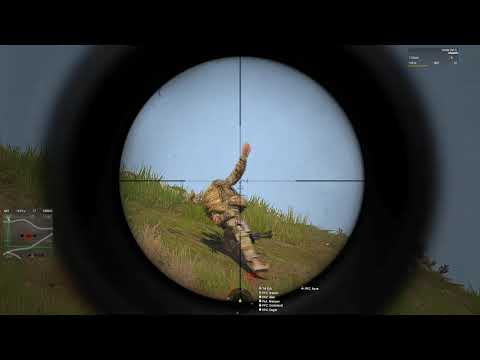