War of Rights: Looking for Volunteers

War of Rights is a multiplayer game set during the perilous days of the American Civil War, in the Maryland Campaign of September, 1862. Campfire Games is devoted to presenting the gruesome and glorious elements of the period, while maintaining the highest level of historical accuracy and realism as is possible with the wonders of CRYENGINE.

Players in the game will be able to play on multiple battlefields of the campaign, from the confluence of the Potomac and Shenandoah Rivers where the Siege of Harper's Ferry took place, to the ridgelines of South Mountain, and to the meandering waters of Antietam Creek at the Battle of Antietam. Additionally, players will also be able to choose from a list of regiments that fought in each battle as well as what rank to fight as, whether they want to slog it out as a lowly private, or if you want to orchestrate the carnage and mayhem as a major general.

Uniforms and bodily features will all be customizable for other players to see as you march and fight in the lines of battle according to the tactics of the period. As a General, you will operate in your headquarters equiped with a map of the battlefield and constantly receiving reports of friendly and enemy positions. Send out new orders to the regiments to move forward, or fall back - all in real time. The orders will move down the chain of command, to the Colonels, Majors, down to the Captains in charge of the individual regiments, all of whom have the option to follow the orders of their trusted commander, or rebel against his wishes and fight as you see fit.

Each map contains a period reconstruction of the buildings, farms, forests, roads, rocks, and Fancy Flowers that existed so players can fight through the streets of Harper's Ferry, in the wooded heights of Fox's Gap at South Mountain, or in the wheatfields and Bloody Lanes of Antietam. Players can feel the whiz of deadly shot and shell fly by their bodies, or hit their comrades or themselves as they scream in a bloody hail from their wounds. Limbs will fly and blood will be spilt once again as Campfire Games brings the fighting of the Civil War right to the player's computer screen!

Will you heed the Union call against the traitors? Or will you fight to defend your family and livelyhood with the Confederacy? You decide! 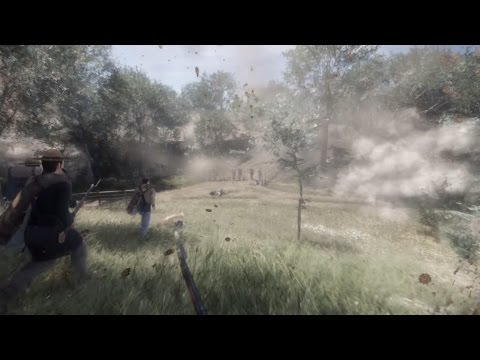 Hi, my name is Bravescot and I've been granted permission to ask for Volunteers from the 29ID to help fill the ranks of the 42nd Pennsylvania Infantry "Bucktails", 3rd Battalion, Co. E and Co. F.

The 42nd Pennsylvania, 3rd Battalion, Co. E and Co. F, are a battalion of infantry at aim to be a relaxed, but still realistic and discipline, battalion for the up and coming War of Rights. We aim to have a maximum commitment of 3 events a week that are being carefully planned so as not to clash with 29ID events. Each Company will have its own event timetable with Co. E being EST based and Co. F GMT based. The battalion plans on playing as both line and sharpshooter due to the regiment being armed with the Sharps Rifles. The Officers of the battalion hold a pool of knowledge and skills whilst the NCOs walk down their own path of specialization to create a team able to train men in all forms of combat. Men are recruited from all across the community with a wide rage of different ability, all are welcome to the 42nd Pennsylvania so long as you keep to the rules. 42nd Pennsylvanian aim to become a well respected Battalion and hope to join in the community with a blast.

If you are interested in enlisting the application form can be found of the forum link about.

I would like to thank Lt. Col. Wheatley for granting me permission to ask for Volunteers.